skip to main | skip to sidebar

For a long time I've been fascinated by unconventional car transmissions.  These days there are CVTs and DSGs, and goodness knows what other TLAs.  But there are no pre-selectors, gearboxes where you select the gear you want - before you need it - and bring it into engagement with a pedal.  The theory is easy enough to grasp but, until today, I hadn't had a chance to see one demonstrated.

Daimler was, for decades, associated with the combination of fluid-flywheel and Wilson pre-selector gearbox.  So it was appropriate that my lesson should take place in the comfortable passenger seat of a 1955 Daimler Sportsman.

The first thing I learned was that you absolutely must leave the car in neutral; unlike modern cars there are no safety lock-outs, it will start in gear and creep forward.  You can tell whether the car is in gear or not from the position of the gear-change pedal.  In neutral the pedal comes further from the floor.  Another thing to remember about the Wilson gearbox is that you can select any gear at any time, there's no need to go sequentially through each ratio.  If you try and do anything inappropriate such as selecting reverse whilst going forward there are mechanical lock-outs to protect the car from damage.  In addition the gear change pedal comes further out from the floor and it takes a hefty shove to push it back.

Other things to note about the Sportsman; first gear is very low, designed to get a heavy car going on a steep incline with a full load aboard and trailer hitched up.  When reversing you can set the engine speed using the hand-throttle on the dashboard and control the car using the brake pedal as you would in a conventional automatic.  The hand throttle can also serve as a simple cruise control on long journeys.

Thinking about the pre-selector gearbox, and the Wilson transmission in particular, it was fitted to a variety of cars; from stately Daimlers and Armstrong Siddleys to sporting Rileys and ERA Grand Prix cars, or the contrasting extremes of glamour as found between busses and the coachbuilt Talbot-Lago.

I suppose it was inevitable that the automatic gearbox effectively supplanted the pre-selector, but sometimes it is nice to revisit the old ways of doing things.
Posted by Fourwheelsteer at 22:11 No comments:

When I visit somewhere overseas, not that it happens very often, I like to see what the locals drive.  It serves as a reminder that you’re somewhere different.  When I first visited France in the late 1980s my abiding memory was of the sheer number of Citroen Dyanes driven by the population of Britany.  Return visits proved disappointing as the French seem to have largely given up on driving interesting cars; just as the French industry has given up on building interesting machinery.


The Italians, it seems, do things differently; as demonstrated by my recent holiday to Rome.  While the majority of Romans drive the same small hatchbacks that are popular across Europe there are plenty of vehicles that you don’t see every day in England.

The FIAT 500 that made its debut in the 1950s is still a common sight in Italy’s capital.  Its small size seems ideally suited to the tight streets and tighter parking spaces in the city.

Even the 500’s successor was represented, albeit by a single example.

The original FIAT Panda was also well represented, sometimes looking a little tatty but clearly still appreciated by their owners.

Keeping with the FIAT theme it seems even the Caribinieri hangs on to its old motors.  There were a few 1st generation Fiat Puntos but the example was probably the tidiest.

Posted by Fourwheelsteer at 22:00 No comments:

Random thoughts from inside my head.

Starting the new year by reading in bed is thoroughly agreeable. Inspired by Terry Pratchett, whose stuff I'm reading, to scribble some stuff down before I forget. One of his essays (possibly more than one) talks about writers as people who have read so much that it starts to overflow; this is - if you like - the overflow from too much reading this morning.

Edward Turner of Triumph, reading about him in Classic and Sportscar, sounds a lot more interesting than I previously released. Used to record bed time stories for his children to listen to when he was away on business. Wrote a paper on the Japanese motorcycle industry after a trip to Japan in the 1960s.


Also:
Lead to thinking about British motor industry. Reminded of a comment about the car manufacturers all moving into unused Shadow Factories after the war, should they have invested in purpose built facilities instead? Now I have a mental image of Jaguar, Rootes, etc as giant industrial hermit crabs.
Posted by Fourwheelsteer at 10:17 No comments:

Nice work if you can get it

Received wisdom is that the best way to make a small fortune is to start with a large one.  Although usually cited as an example of people frittering away their wealth but it also conceals the truth that it takes money to make money.


Consider the cars people buy; ten years ago a ford Focus ST or Mondeo Turbodiesel for about £19,000.  Prices for the Focus today are in the region of £4-5,000, the Mondeo could be had for £1,000 or less.  That, as you’ve probably worked out, is £14-18,000 lost in depreciation if you bought new and kept the car all that time.  Although depreciation is non-linear it works out as costing at least £1,400 on top of the other running costs.


Of course, to make that money you need to be in the position to buy the Ferrari in the first place.  You also need to choose your car wisely, if you’d gone for an ordinary Ferrari 575 you’d have saved about £40,000 initially but that car would only be worth £90,000 today (only!).  It also makes me wonder if anyone leased a 575 Superamerica and what the monthly payments are like on a car that is going up in value.
Posted by Fourwheelsteer at 22:35 No comments:

My car passed its MOT today.  No need for any remedial work - which you can't take for granted with any 18-year old car, especially an old Jaguar.  As you can imagine I'm feeling pretty chuffed.

A new development on the latest MOT certificate is a mileage history, showing the last four recorded odometer readings.  It is interesting to see how the mileage has increased over the years (I did 6,000 miles last year and 4,000 the year before).  Weather it will do anything to combat clocking is a different matter.  My instinct says that the greatest benefit in adjusting a car's mileage is in the first three years, before it ever sees an MOT bay.

I do like the Jaguar, it is a lovely old thing.  Hopefully it will keep going for a good few years as I can't think of anything within my modest means that I would rather own.
Posted by Fourwheelsteer at 21:52 No comments:

Every so often a car comes along that just seems "right".  The Volkswagen XL1 is one of those cars; mainly because it is low, sleek and compact - a perfect antidote to most of today's bloated machines.  What's not to like about a low, light, wind cheating, mid-engine coupé?  I don't necessarily go along with the use of complex machinery to chase fuel saving and cut trivial emissions but I hope driver enjoyment hasn't been forgotten in the pursuit of 314mpg.  It would be a terrible waste to build a low, light, mid-engine car that wasn't fun to drive.

When I first saw it the XL1 seemed familiar, the shape reminded me of the Pininfarina Ethos II concept car.  Perhaps it is not surprising, the dimensions are similar and both had low-drag, mid-engine bodywork.  Under the smooth skin both had two-cylinder engines although the Ethos II was two-stroke, the XL1 is a diesel hybrid. 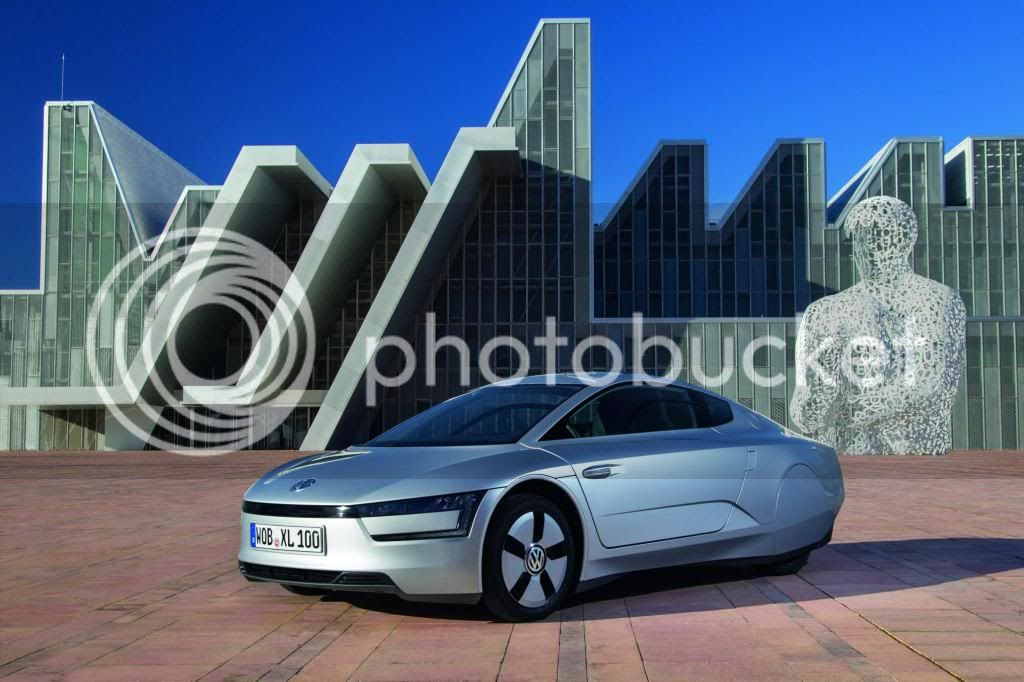 The diesel engine in the XL1 worries me.  How responsive can a two-cylinder turbodiesel be?  VW's forced-induction diesel engines can punch hard once they get going.  Frustratingly they also suffer from a noticeable time delay between calling for power and the engine delivering the goods.  Maybe the car's low weight and the presence of an electric motor will mask the effect. The other thing that worries me is the choice of tall, slender tyres.  Yes, a 145/55-16 tyre will cause very little aerodynamic drag and minimal rolling resistance in a straight line, but in the real world I think drivers would be better served by something wider, lower profile and on smaller diameter wheels.  Will the XL1 end up with an over-nannying electronic stability system to compensate for the poor choice of footwear? 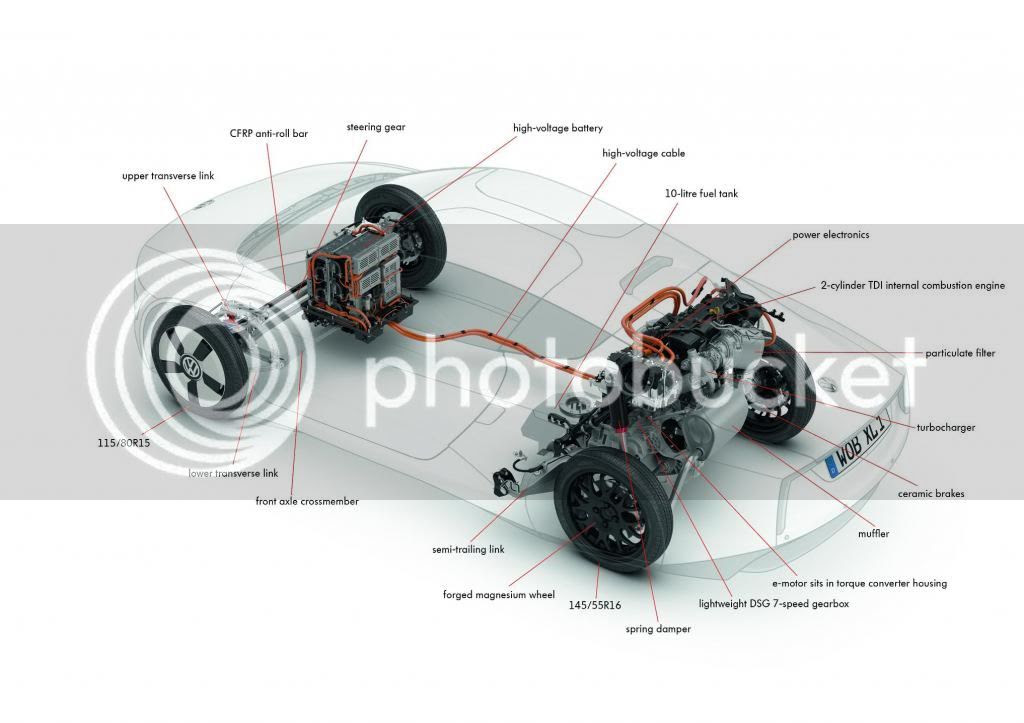 I know, I know, I want the XL1 to be something that it was never intended to be.  But why can't we have cars that are frugal, fleet footed and fun?
Posted by Fourwheelsteer at 15:18 No comments:

When I was a lad you couldn't open a car magazine without seeing tons of grainy, fuzzy photographs of cars covered in bin bags and black tape.  Living almost next door to Jaguar, Land Rover and Aston Martin it is not unusual to see disguised prototypes coming and going but I'm usually driving, which makes it difficult to take photos.  This time I was on foot and had a camera to hand to capture a prototype Range Rover. 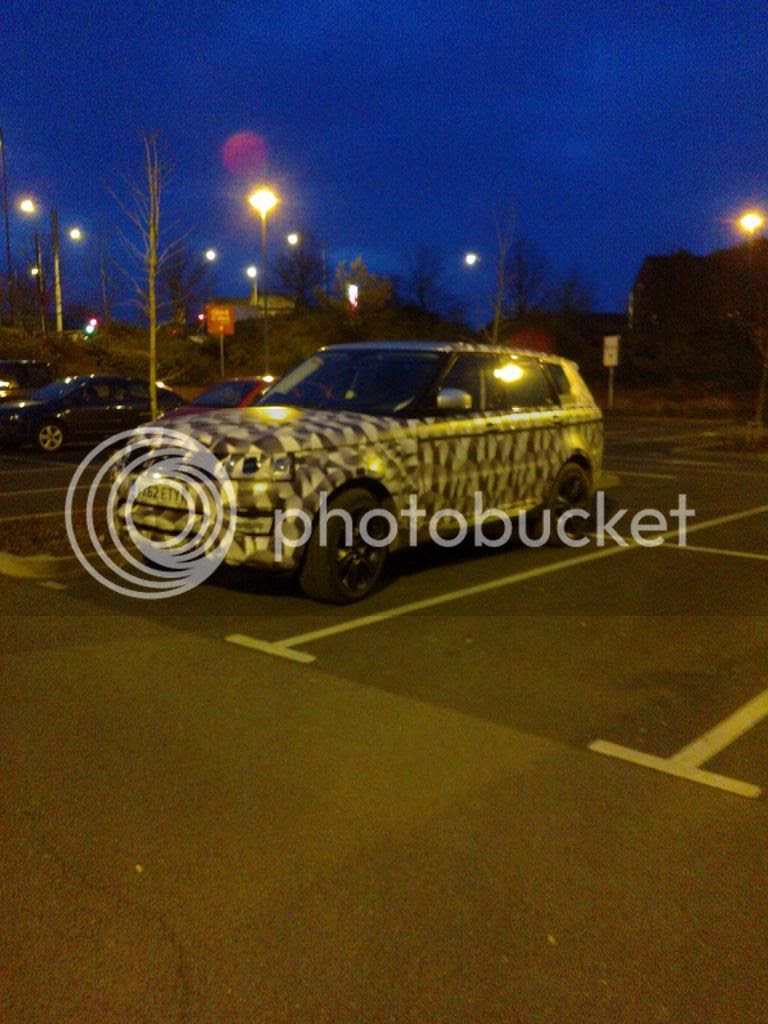 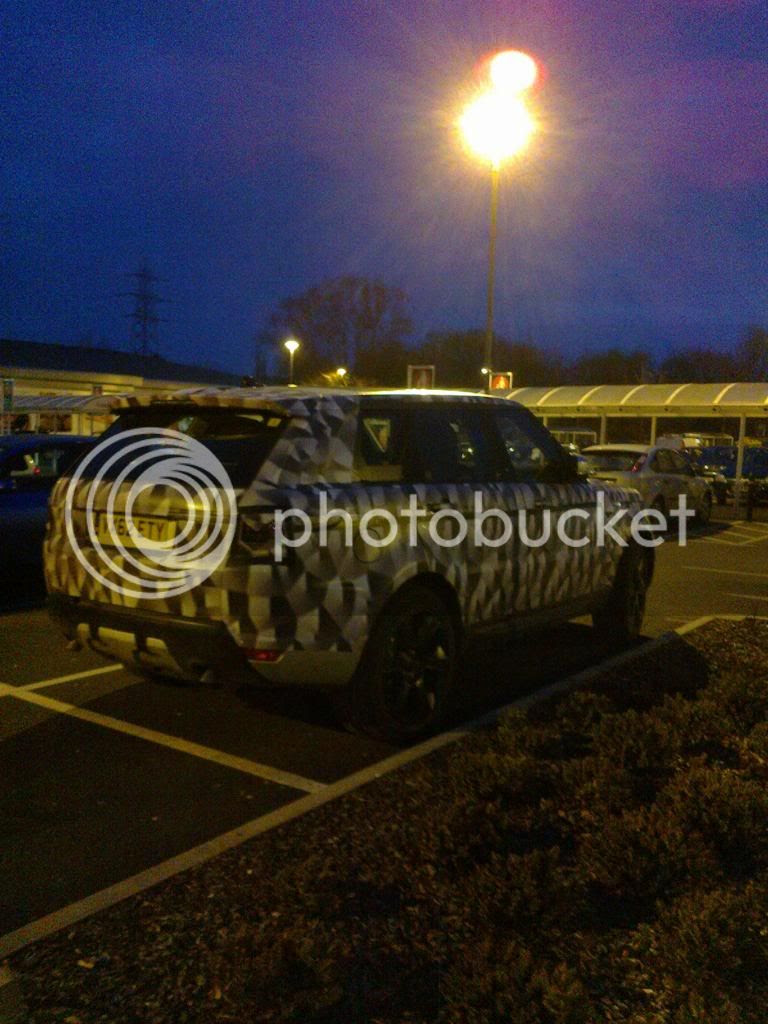 I'm guessing it is the next Range Rover Sport, since the Evoque and proper Range Rover seem too new to be replaced.
Posted by Fourwheelsteer at 21:29 No comments:

Fourwheelsteer
I've got a "proper" job, which is great but I've always wanted to be a motoring writer. Now that side of things has started going somewhere; writing regular news stories for The Car Enthusiast (see link below).

Related Bloggs and links to my writing