skip to main | skip to sidebar

Thinking of buying something different

I know my trusty Citroën BX will not last forever and the prospect of promotion at work has set my mind to thinking of buying a different car. Watching the historic motor racing at Oulton Park last weekend and a passenger ride in a friend’s MG Midget has left me hankering for a classic.

A Midget probably wouldn’t do, I would like something that is capable of sustaining a decent motorway cruising speed and that I can drive for a couple of hours at a time. Although I don’t need to use a car for commuting I would need something happy to live outside in all weathers that could be used every weekend without demanding too much maintenance. Such maintenance as is required should not be so complex as to be beyond my modest mechanical ability, nor too expensive if I ask others to carry it out. Other practical considerations should, I suppose, include reasonable fuel consumption – ideally no worse than 20mpg. Emotional considerations, for want of a better expression, are that I would like something good to drive. A decent turn of speed would be good but not necessarily essential; what is more important is tactility; steering that is slop-free, accurate and if possible high-geared; similarly I’d like a gear lever that moves with slickness and speed, ideally controlling a well-spaced set of ratios; pedals should be well-spaced for heel-and-toe action and hopefully not needing either excessive pedal travel or undue effort. I’d also like something stylish – foolish, I know.

I imagine a two-litre Bristol would be perfect; sadly, such things are beyond my pocket and possibly require more specialised care and attention than I could give. Only one car in my experience has come close to meeting my requirements; the MGB roadster. I don’t think I’d want a roadster, a GT would be better for my needs, leaving only a few doubts about whether I could cope with just two seats. Other possibilities I have considered, without knowing if they are sensible or not, are the Triumph GT6 and Volvo Amazon.

There are two questions I need to answer. Firstly, is it a mistake to subject a classic to the sort of treatment I’d give it; i.e. using it twice a week whilst keeping it outside when not in use? Secondly, what cars would you suggest, given a notional budget of about £2,000?
Posted by Fourwheelsteer at 21:47 No comments:

Time for a little light entertainment before the weekend. I am quite pleased with some of the photos I took at the Gold Cup. Static photos are quite easy to take but I’m particularly fond of this scene with a Lister Jaguar. 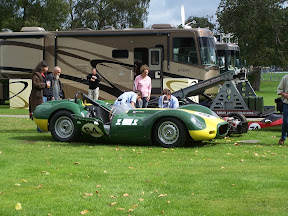 Action photos are more difficult. I know a poor workman blames his tools but action pictures don’t always focus in time and there is an annoying delay between pressing the button and the picture being taken – time that can make the difference between capturing the moment and missing it completely. One that did come out well was this scene of three Lotus Cortinas cornering hard at Cascades corner. 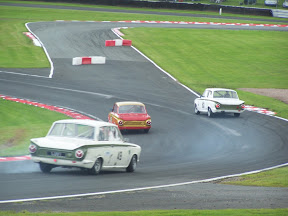 Sometimes the pictures were just a little too small or slightly out of focus. This picture of a Ford Falcon illustrates the problem. 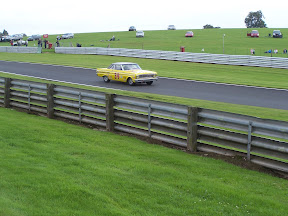 Even more depressing is the perfectly framed shot that is completely out of focus. This Chevrolet Corvette was an interesting subject as it had been hastily repaired after an accident, you can make out the blue “gaffer tape” but the detail is lost. 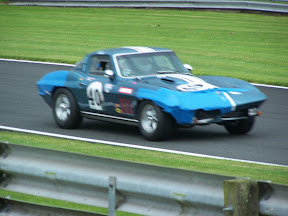 Then there are the photos that were taken way too soon… 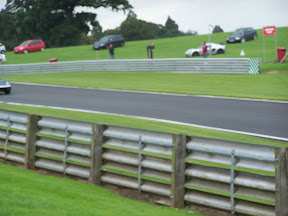 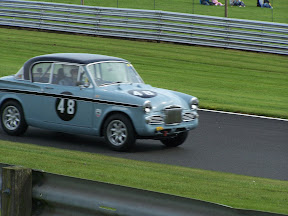 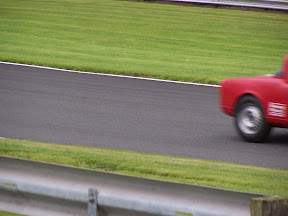 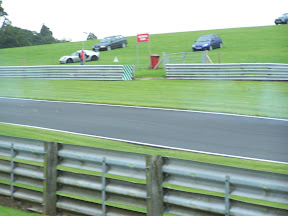 But sometimes, if you’re too slow on the button, all you get is a picture of an empty stretch of tarmac. 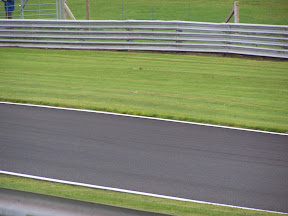 Posted by Fourwheelsteer at 21:21 No comments:

Time to cover some of the highlights of the Gold Cup weekend. One of my favourite things about the Gold Cup is the support from local classic car clubs who bring all manner of interesting machinery. I failed to photograph a very tidy chrome-bumper Alfa Romeo Alfasud but whoever owns it deserves a medal for keeping it in such great condition.

To start with, the Rolls-Royce enthusiasts club gathered some lovely cars, including a good many series-1 Silver Shadows but my heart was more taken by this Corniche.

If you prefer older cars there was this lovely Thrupp and Maberley 20/25 saloon.

It looked imposing although I noticed a distinct lack of rear-seat leg room. This is certainly not a R-R in which to be chauffeured. Even more interesting was this Silver Cloud.

According to the notice in the window this was a development vehicle and had been fitted with an experimental V8 engine (although I believe it now has the production V8).

It wasn’t just Rolls-Royces, Bentleys were well represented too. I think this is an S-series Bentley Flying Spur Continental but I’ve never seen one with suicide rear doors before.

My favourite Bentley was this one.

Not sure what model it is but I love the lines of this two-door coupé. I’m not sure I have captured its best angle but the cars were so tightly packed it was difficult to get back far enough to line up the photos – especially as I didn’t want to risk scratching someone’s pride and joy.

Lots of Jaguars turned up including plenty of XKs:

The last car was parked in the paddock rather than on open display. Whenever you go to a historic race meeting it is always worth having a look at the cars being prepared for racing, not only do you see interesting machinery like the Jaguar above but on the whole it is a friendly and relaxed place to be. Just remember not to get in the way of anyone working hard to prepare a car for racing.

The lightweight E-types did very well in their race but smaller, lighter TVRs with big, American Ford V8 engines seemed to go faster.

In fact plenty of almost prosaic machinery was giving the expensive stuff a run for its money. MGBs, for example, can go far faster than you’d think possible.

I hope this hasn’t been a pictorial overload; I’d like to finish with a personal favourite sighting. It is a Bristol 400 in very tidy condition but looking like a car that is used and enjoyed as it should be.

Posted by Fourwheelsteer at 21:11 No comments:

This blog entry could be subtitled “The triumph of public transport” because I was truly impressed by how easy it was to make the journey up to Manchester.

It all started because my own aged Citroën BX was not in a fit state to undertake the journey. It is in need of a good service (which it will receive shortly) and in any case it is not the most comfortable long-distance conveyance. As a result I took a look at National Rail’s web site for trains from Leamington Spa to Manchester Piccadilly. Not only is there a reasonably frequent service but the cost of travelling in the middle of the day is surprisingly reasonable. By booking ahead – two days before my departure, hardly an ordeal – I purchased first class tickets for just over £40. The premium over a standard ticket was well worth it when you consider that first class passengers get free drinks, a sandwich and a free copy of The Times. The larger seat and reduced crowding almost seem like incidental bonuses.

The final triumph for public transport came on my return to Leamington. I only had a short wait for a bus to take me back to my village. You could almost believe the bus timetable was supposed to dovetail neatly with the train times.
Posted by Fourwheelsteer at 21:29 No comments:

I spent the weekend up in Manchester with my friends Simon (of MG Midget fame) and Ally. What a wonderful weekend it was, catching up, chatting, messing about with Si’s sports car, enjoying tasty food and taking in some motor racing at Oulton Park.

Over the next few days I’ll try and post some of the photos I took of the racing and of the interesting cars parked on the hill overlooking Cascades. Before then I need to share a few observations:

1. The noise limit seems to have been tightened, some cars did not sound as ear-splitting or dramatic as I remembered from past years.
2. What happened to the pre-war cars? Last year there was some pretty good racing from the vintage and post-vintage crowd.
3. Where have all the Jaguars gone? The first Gold Cup meeting I attended had XKs, C-types and D-types racing but they seem to have deserted the Gold Cup.
4. Digital photography of moving cars can be a bit hit and miss. I promise to share some of the more amusingly bad examples.

I’ll leave you with this picture from practice for the Guards Trophy race. 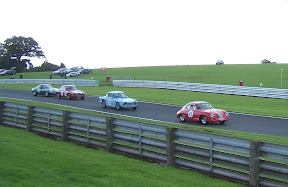 Posted by Fourwheelsteer at 22:15 No comments: 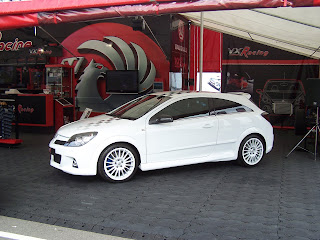 One of the cars I drove but failed to photograph on the SMMT test day back in May was the Vauxhall Astra VXR Nurburgring. This was a serious oversight as it was a thoroughly impressive car.

Mostly the impression was of a huge amount of noise from the special Remus exhaust. Whenever rapid acceleration was called upon – something the VXR can muster in abundance – a deep, resonating growl came from the rear of the car. I also think there were some pops and bangs on a trailing throttle. With my sensible head on it all seemed a bit juvenile but it was rather good fun.

As far as it was possible to tell the Nurburgring could muster a fair degree of grip and steering control on the Millbrook hill circuit. How much was down to the basic virtues of the VXR and how much to the modifications made to the Nurburgring model I could not say as I’ve not yet driven a standard VXR. It was the eager turn-in to tight bends and the slingshot acceleration out of them that really impressed.

Other than that the VXR Nurburgring had a comfortable interior, apparently decent ride comfort and a level of refinement at speed that you wouldn’t credit from the noise made under acceleration.

For me it is vital that a hot hatch should be fun to drive. My current favourite hot hatch is the Renault Clio RenaultSport 197 but the Astra VXR Nurburgring runs it very close for fun and is probably more practical.

Posted by Fourwheelsteer at 20:58 No comments:

Fourwheelsteer
I've got a "proper" job, which is great but I've always wanted to be a motoring writer. Now that side of things has started going somewhere; writing regular news stories for The Car Enthusiast (see link below).

Related Bloggs and links to my writing